Showing posts from July, 2010
Show All

Mentorship on Relationship: the discussions(2)

July 12, 2010
Ever so wonderful on the day. 40 things I want and you want. Funny, that we had common wants and don't want. Not to our amazement, but quite fascinating, we learnt that itS not mY problem or her problem, but Men issues and Women issues. Principle: An average man will want what an average woman may not deliver. An average woman may want what an average man may not deliver. The result: the law of the average can never deliver the best result. Compromise: Negotiate, so that the average man will become what the average woman wants, vice versa. So why? Some say, women are emotional, and Men are Logical. Emotional being allowing one's heart to determine what one's head is asking for, and logical being allowing one's head to determine what one's heart is asking for...lol. But really, it just cant be that every woman is emotional and every man is logical. Mentor advised that most of the time it may seem so, but usually logic is found in emotion and emotion is found in
7 comments
Read more

Mentorship on Relationship: the discussions

July 04, 2010
And so it was that the first 'mentoring class' was held. The topic was Relationship. We looked at the three kinds of relationship(friendship)that one can have and one should note. 1. Confidants : those who are sold out to you. The are not moved by your mistakes, they stick with you all the way. 2. Constituents :those who are sold out to your ideas/achievements only. As long as those ideas and achievements remain, they remain, but they are not sold out to you. When you make a mistake or error of judgment they take to their heels. 3. Comrades : those who fight your fight. As long as there is a fight to pick, they are with you, But once there no fight, you become boring and they leave. Two of the facilitators, Sola and Niran assisted in bringing both the spiritual and physical depth to the class. In particular I liked the covenant relationship between David and Jonathan(confidants); Moses and Aaron(constituent); Paul and Demas/ Moses and the children of Israel). I particularly
Post a comment
Read more
July 03, 2010 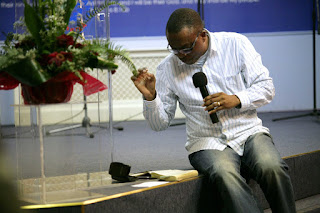 VINE MENTORING GROUP(VMP) This group was founded by Tayo Arowojolu The membership was drawn from the 12 men who took part in the father's day play agenda on the 24th of June 2010 at NCC Edmonton, London auditorium.Two mentees and two special assistants were also added. This is a collection of mentoring relationships that meet together on a regular basis for an agreed upon length of time. Primary Purpose 1. Set important developmental goals 2. Build competence and character to reach those goals Components/Methods 1. Mentor-facilitator and mentee 2. Peer mentoring relationship amongst the group 3. All mentees and 2-3 facilitators Primary Objective Accountable to each other on the two primary purpose above Advantages 1. Maximise its pool of qualified mentors 2, Bonding and Building a network 3. Ability to move at a similar pace into greater responsibility 4. Multiple sources of feedback 5. Normalise a mentoring culture throughout the organisation Disadvantages 1.Confiden
8 comments
Read more

July 01, 2010
PRAYER CHIT CHAT (6) Jehoiachin: it was the mercy of God (2kings 25v27-30 A captured King, a subdued kingdom, and dejected people in slavery. Then suddenly the mercy of God descended on the King, and he began to eat with the royals. This month in the mighty name of Jesus, you will be released to partake in the inheritance of the people of God. Amen. Paul : it was the Grace of God (2 Cor 12 v 9) Maybe there is a challenge you are facing, maybe there is depression that has hit you, maybe there seems to be no strength in you. By the grace that was available to Paul, this month you shall be immersed in that grace and flourish in Jesus Name Amen. David: it was the favour of God (1Sam 16 v 11-13) Yes, in the past you have been ignored, deprived, denied and neglected. This month of July is your month. All such that have passed you by, will come back to pay you big. You will receive an accelerated blessing that will catapult you to your rightful place of honour in Jesus Name. Favour that has b
Post a comment
Read more
More posts

Tayo Arowojolu
A lawyer, orator, a life coach and a Pastor. Tayo is married with 4 children. Pastors New Covenant Chruch Edmonton, and the Pastor of NCC Edmonton Conference in the UK.